The number of patent applications filed by Danish food companies in Europe in 2015 accounts for 4.1%. This is a relatively low figure when looking at comparable countries. If Denmark is to maintain a leading position within the food technology sector, an increased focus on patenting of research and development is important.

In recent years, there has been an increased focus on growth, development and innovation within the food area in Denmark. As a result, an increasing number of network groups have been established, including Future Food Innovation, Agro Food Park, Danish Food Cluster, Videncenter for Fødevareudvikling and Nationalt IngrediensCenter. These network groups have attracted attention in both Denmark and abroad. And this attention is justified since Denmark has proud traditions as an agricultural country where food and agro-industrial products account for approx. 24% of the total Danish commodity export (Source: The Danish Ministry of Foreign Affairs, The Export Council). Danish researchers within the food area have worked with innovation for many years but the question is whether the Danish food companies protect this innovation through patenting and thereby create an advantage compared to their competitors. We will now take a further look at the patent activity among Danish companies compared with their competitors in other European countries. 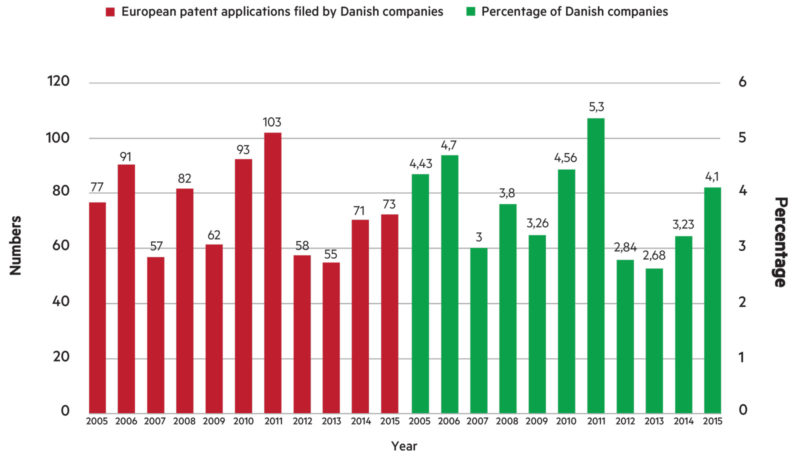 Figure 1. Number of published EP applications filed by Danish companies per year (red), the percentage compared with total number of filed EP applications (green). Source: European Patent Register. Note: The figures for 2015 are not complete, since data for the fourth quarter of 2015 were not available when the analysis was performed.

Status on the patent activity in the Danish food industry

If we look at the number of patent applications filed in Europe in 2015 within the food area, 4.1% originate from Danish companies, whereas a much smaller number originate from the other Nordic countries, Sweden and Norway, figure 2. If we compare ourselves with Switzerland, whose number of inhabitants is only slightly higher than that of Denmark, then the patent activity within the food area is more than three times as large as Danish companies. If we compare ourselves with the Netherlands, which is also considered as an agricultural country, but whose number of inhabitants is almost three times as large as that of Denmark, then the Dutch companies are also far more active when it comes to patenting than the Danish companies. This indicates that all the resources which are annually spent in Denmark on innovation within the food area do not result in a corresponding protection of this innovation through patenting. In this way, the competitiveness of Danish companies is not protected on a European basis.

Figure 2.Percentage of EP applications in 2015. Source: European Patent Register. Note: The figures for 2015 are not complete, since data for the fourth quarter of 2015 were not available when the analysis was performed.

One reason for this may be due to the perception that patenting is difficult and expensive. Another reason may be that in Denmark before 1995, you could not patent food products but only the preparation of food products. However, in 1995, the patent law changed and it became possible to patent food products. The last 10-15 years, many of the large Danish food companies have acknowledged patents as an important parameter in the valuation of a company. IPR is thereby incorporated in the major food companies in the same manner as in the pharmaceutical industry.

This is also reflected by the fact that the large food companies in Denmark account for most of the published European patent applications of Danish origin in 2015, while the smaller and medium-sized companies are less active. The same trend is observed in the Netherlands and Switzerland, where patent activity in the food industry is also dominated by large companies (e.g. Nestle and Unilever). 77% of the EP applications from Danish companies in the food industry were filed by only six companies (Novozymes, Dupont, Chr. Hansen, Arla, Gumlink and Fertin Pharma), while the remaining 23% of the EP applications were submitted by 18 different applicants. These figures could indicate that there is a potential for the small and medium-sized food companies to pay more attention to protecting their innovation.

We have analyzed the patent activities within the area of cheese and cheese production in order to get more information about a specific food area. Cheese and cheese production has been known for many years and one might therefore think that patenting within this area makes no sense since it could be assumed that everything had already been patented. We have analyzed the patent activity within the last 10 years.

Figure 3 shows that “cheese” is still an area with a high patent activity. There are more than approx. 200 new publications per year. Also within the specific area of cheese the patent acitivity in Denmark is primarily dominated by large companies such as Danisco/Dupont, Christian Hansen and Arla, whereas the patent activity from small and medium-sized companies does not show (data not shown). Furthermore, figure 3 shows that within the traditional industry areas (Europe, USA, and Japan) the number of patent applications has been declining steadily over the last 10 years, whereas the patent activity in China over the last 10 years has been increasing steadily. This indicates a change of the geographical focus with respect to patent activity. The question is whether this is a sign that the “Chinese are coming”. 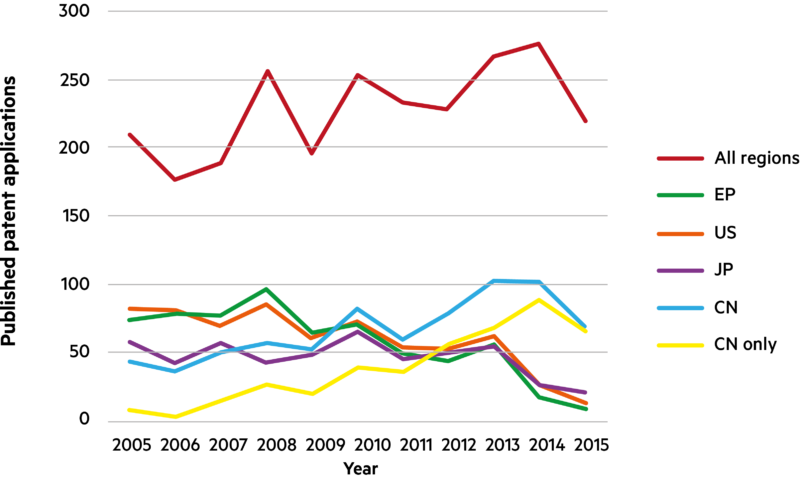 Figure 3.Published patent applications per year within the technical field ”cheese and cheese production”. Source: PatBase. Note: The figures for 2015 are not complete, since data for the fourth quarter of 2015 were not available when the analysis was performed.

Based on the patent statistics, this does not seem to be the case. Instead this should more be seen as an indication that China has become an interesting market for foreign (and Danish) companies. Additionally, Chinese companies are also more active when it comes to patenting as can be seen in the “CN only”-graph, which shows patent applications which have only been published in China (i.e. patent applications have not been filed in other countries). Overall it seems as though the increased patent activity in China comes from two groups: 1) Chinese companies with a primary focus on the Chinese market. 2) Non-Chinese companies with an increased focus on the growing Chinese market. If, or when, the Chinese companies in the long term start patenting in Europe, this might have a large influence on the European market since there is clearly a very high patent activity in China which has not yet spread beyond the borders.

There are still no signs that Chinese companies are filing numerous patent applications in Europe but this picture might change when the Chinese companies start focusing on an international market. If Denmark is to maintain a leading position within food technology, a greater focus on patenting of research and development could play a significant role. Likewise, if the smaller and medium-sized companies also increase their focus, then Denmark’s position could be further strengthened.