Risk management is closely linked to the realization of a company’s strategic and operational objectives – especially when it comes to the launch of new products, which carries a risk of infringing competitors’ patent rights.

After grant the European patent is “atomized” into a number of (identical) national patents, which are subject to national legislation. If a company wants to challenge the validity of these (identical) patents it is necessary to take legal action in each of the countries where the company wishes to challenge the patent’s validity. Obviously, this is an expensive and time-consuming process. In addition, the decision from the court may differ from one country to another due to the countries’ different patent practices. Therefore, such a strategy is uncertain, and the company’s scope for manoeuvring will be limited in the, often long, period in which these cases are pending before national courts.

At the same time, filing an opposition, or merely the threat of it, is often an efficient way to obtain a favourable licensing agreement with the patent proprietor.

The Opposition Process before the EPO

If this deadline is exceeded it is no longer possible to file an opposition against the patent with the EPO, and the patent must instead be challenged at national courts as described above. It is therefore crucial that an active surveillance system has been established allowing the company to carefully monitor the competitors’ (potentially dominating) patent applications. In this way, an opposition strategy can be decided already when the patent application is close to grant, see steps 1-3 in the figure. 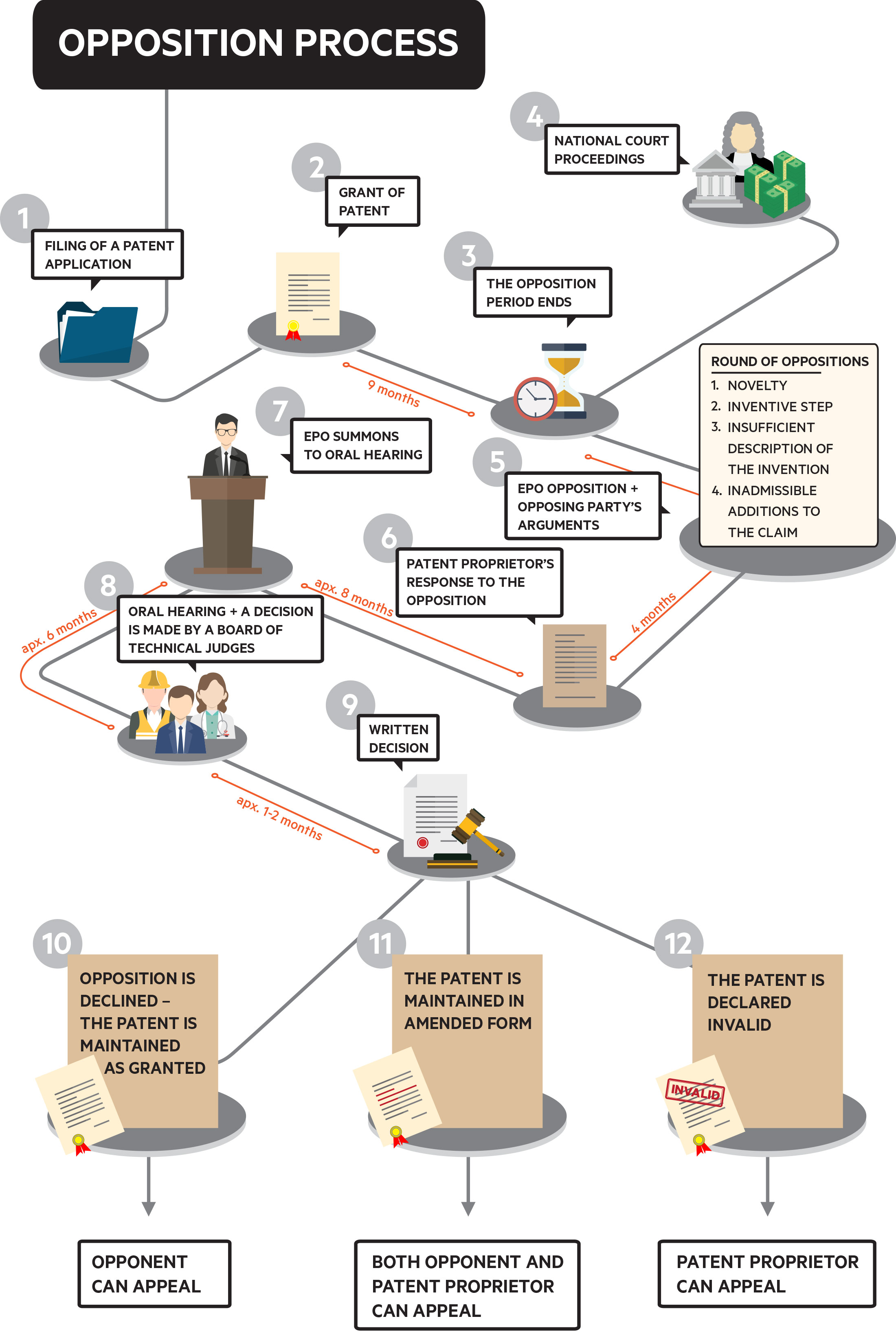 Just as in invalidity proceedings initiated by national courts (step 4), it is possible to challenge the validity of a patent due to lack of novelty and inventive step in the opposition processes before the EPO. It is also possible to challenge the validity due to more formal deficiencies of the European patent. One example is if the patent does not disclose the invention in a manner sufficiently clear and complete for it to be carried out by a skilled person. Another example is if the proprietor has amended the patent claims during prosecution in such a way that it contains subject-matter which extends beyond the content of the application as filed. In practice, the latter argument is often useless at invalidity proceedings before the national courts. However, due to EPO’s very strict practice in this area it is a highly effective, and often used, ground for opposition before the EPO, see step 5 in the figure.

The opposition process itself is in many ways similar to a national court proceedings: First, the notice of opposition is filed, which contains the opponent’s arguments for lack of validity, accompanied by the documents (prior art), which the opponent believes deprives the patent its novelty and/or inventive step. Then, the proprietor receives a term of four months to submit a response and amend the claims provided that the patent proprietor considers it necessary or advisable.

Typically a year after the notice of opposition has been filed the EPO summons the parties to an oral hearing, which takes place about six months later. Here, the parties will be allowed to present their arguments (orally) before the Opposition Division. The Opposition Division consists of three experienced EPO Examiners, who act as a panel of judges. The main difference compared to national invalidity proceedings is that these judges have a technical background. This is also why examination of, and assistance from, technical experts almost never occurs at the EPO in contrast to national invalidity proceedings where this is often essential in order to assist the legal judge in the understanding of the technical issues, see steps 6-9 in the figure.

The result of the opposition

Immediately after the oral hearing the Opposition Division issues a decision (orally), and about 1-2 months later EPOs forwards the decision in writing to the parties with a detailed reasoning for their decision.

Opposition proceedings before the EPO can have three different outcomes

The ideal outcome for an opposing party is obviously that the patent is invalidated. However, in many cases it will be a satisfactory result that the patent is maintained with amended claims that no longer covers the company’s products, pipeline or development programs. Therefore, it is important beforehand to have defined your criteria for success: Is it necessary to spend resources on a complete invalidation of the patent or will less have the same effect in practice?

What are the costs?

The costs for conducting an opposition case is dependent on the nature and complexity of the particular case. As a rule of thumb, opposition proceedings before the EPO will typically amount to 25,000-65,000 €. This should be compared to the typically much higher costs associated with conducting invalidity proceedings before the national courts. One reason for the lower cost is that the case is only heard at a single venue (EPO’s Opposition Division), and not at multiple national courts, and that the decision takes effect on all countries covered by the European patent. Another major reason for the lower cost is that the often very complicated and time-consuming work with witness preparation is avoided.

Filing oppositions against a competitor’s European patents is an effective proactive risk management tool. The process is relatively swift (1.5-2 years), less costly than national litigation, and can often open up licensing negotiations with the patent proprietor.

The article was published in Dansk Kemi (written in Danish)