In May of 1995, the first 1000 city bikes were wheeled onto the highways and byways of Copenhagen. Some of these very first city bikes were sponsored by Plougmann, Vingtoft & Partners, and were embellished with art by the famous Danish artist Bjørn Bjørnholt on the wheels. Ole Ploug­mann, who was a great bicycle enthusiast, helped finding ways to protect this sustainable invention after learning about the project, when visiting his local bicycle shop in Hellerup – the very same shop, which had been commissioned to deliver the first batch of city bikes.

As a thank you, Ole Plougmann received a city bike from Fonden Bycyklen (see the picture below) – an honor, which has only been bestowed upon a selected few. 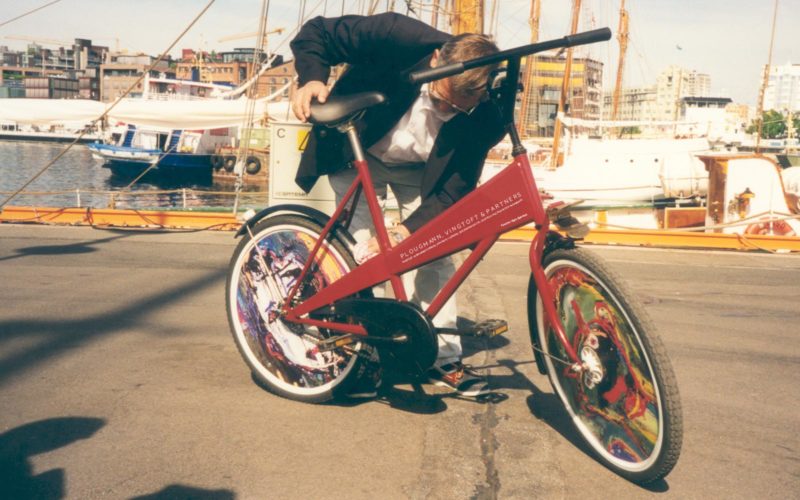 One of the more prominent receivers is former president of the United States, Bill Clinton, who was presented with a “City Bike One” during a visit to Denmark in 1997. The then president did not waste time before taking the city bike for a test run, which received a lot of media attention worldwide, and helped promote Copenhagen as a green and environmentally friendly bike capital.

Only a selected few have been presented with the gift of a city bike. One of the more prominent receivers is former president of the United States, Bill Clinton.

If we fast forward 20 years to February 2015, the latest generation of the city bike was launched – now with an electric motor. The concept has spread to the rest of the country and the world, and many big cities such as London and New York have also jumped on the bandwagon. Today, China is a world leader, when it comes to city bikes, in Shanghai alone there are 28,000 city bikes available.